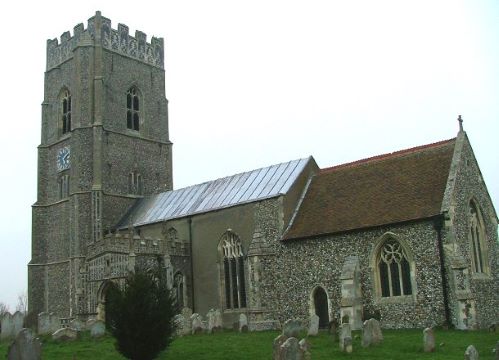 The oldest part of St Mary's Church, the south wall of the nave, dates back to the 12th century, indicating a Norman rebuilding of the original Saxon church. A more extensive reconstruction was begun in the 14th century; the chancel was enlarged and the north aisle built and joined to the nave by an arcade of seven arches in about 1335. Work was also started on the tower, but was halted by the Black Death in 1349. When work restarted in the 15th century, the nave walls were raised in height, new windows inserted and a new ceiling constructed. The tower was finally completed in about 1481 and the north and south porches were added.

The Interior of the Church

The interior of the church has seen many changes. Five hundred years ago, chancel and nave were separated by the rood screen, six panels of which, recovered from a local farm, stand in the Sampson chapel, with the rood beam above, reached by a small staircase at the south wall. The walls were painted and adorned with statues and there were no seats.

At the reformation, the rood beam and rood screen were swept away, the statues broken up and the walls whitewashed. In the 17th century, the north aisle was given a plaster ceiling, the panels over the chapel at the east end being embellished with the arms of the Sampson family. Also in this period, with the emphasis on the sermon and the bible reading, a three-decker pulpit was erected on the south side of the nave, its canopy suspended from a hook in the wall above and a niche for the preacher’s hourglass. Box pews were provided for the congregation and a gallery at the west end for musicians, and later, the organ.

In the 19th century, the altar once again became the focus of worship, but it was not until 1888 that the old pulpit and box pews were removed and the church took on its present appearance internally.

During the latter half of the 20th century the former woodblock floor was replaced and the organ sited at the West end of the North Aisle. The sense of light which is a feature of the church was greatly improved when the Victorian windows containing panes of pastel shaded glass were replaced with plain. At the same time the ferramenta and stone work surrounding the windows were refurbished. Since the turn of the century a new lighting and a sound system have been installed and the central heating system improved.  In 2012 the organ was resited at the West end to allow kitchen and toilet facilities to be installed at the West end of the North Aisle. This work was completed in January 2013.

The South Porch - There are stone and flint flush work panelling, carved niches and pinnacled buttresses. A delicately carved wooden ceiling is divided into 16 panels with elaborate tracery which lay hidden until revealed by roof repairs in 1927.

Nave - The early 15th century font has decorated panels. There are traces of a wall painting of St George on the south wall, a large hook to support the pulpit canopy and a niche for an hourglass. The 15th century roof is formed of arch-braced principals, alternating with hammer beams terminating in figures of angels, the eastern most bay being painted as canopy of honour for the rood. The 15th century lectern is of German work, the eagle and delicately carved base are apparently of different origin.

North Aisle - Niches flank the east window, one containing the headless figure of St. Anne, the other a fragment of what may have been the market cross. A stone sedilia on the south side of the sanctuary is richly carved and canopied, with squints behind to give a view of high altar. The chapel ceiling is decorated with arms of the Sampson family. Two vaults below contain coffins of members of the Sampson and Thorrowgood families whose monuments adorn the walls. The 15th century rood screen consists of six panels in original colours, depicting prophets holding scrolls and kings. The king holding an arrow represents St Edmund the Martyr. The old font of 12th century origin was returned to the church in 1927 after use as a cottage doorstep. The recess in the north wall contains an alabaster statue of the Trinity and other fragments.

The Bells - There is now a ring of eight bells. For many years there were six, the oldest dating from 1576 followed by three of seventeenth century vintage (1638, 1662 and 1680) and two from the eighteenth century (1716). The tenor bell of 1638 was recast in 1969. In the early twentieth century the tower was found to be too frail to permit ringing the bells. For many years they could only be chimed until 1970 when a cast iron frame was installed at an acceptable level below the original wooden frame allowing the bells to be rung again. Finally, the peal was augmented to eight in 1985. The two new bells were donated by parishioners. Ringing regularly precedes Sunday services and Thursday evening practice is part of the village round.

Under the Our Community page on this website is a sub page for St Mary's Church (click this link to go there), with information about the spiritual life of St Mary's Church, Kersey.