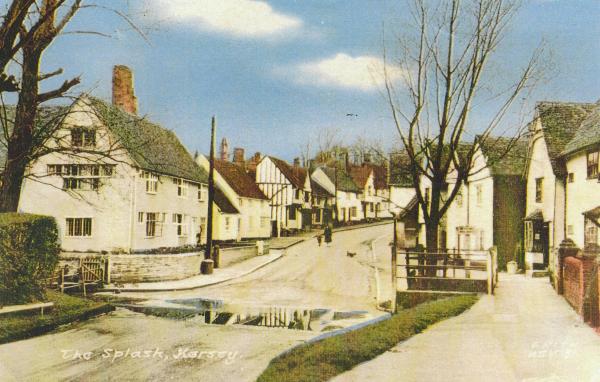 This period saw a continued influx of ‘incomers’ as well as renovation and rebuilding of cottages.  The first council houses in Vale Lane were built in 1947.  Unlike the rest of Kersey, they all had flush lavatories and running water.

The Village Produce Association was set up in 1947 and its annual show remains an important Kersey event to this day.  Previously though the show incorporated a fete.  The Village Hall became an even more important mainstay of community life.  Plays were performed there and even Wilfred Pickles came with his ‘Have A Go’ radio show.

During the 20th century, artists and writers were attracted to Kersey.  The prolific novelist and travel writer, Ralph Hammond Innes, who wrote as Hammond Innes, lived in Ayres End from 1947 to 1998.  Peter Vansittart, the predominantly historical novelist, divided his time from the early 1950s until his death in 2008 between Hampstead and Little Manor.  It was originally his mother’s cottage.  Kersey Pottery was established in 1969 by Robert Tarling and in the early 1980s, it was taken over by local potters Fred Bramham and Dorothy Gorst who ran it until 2013 when they retired.  The Pottery has now closed.

With car ownership and increased access to the countryside for town dwellers, Kersey became a tourist hotspot in the 1960s and 1970s.  The village featured on car and coach touring trips around Suffolk and East Anglia.  It also attracted film-makers and television producers as a location for filming.

View picture gallery for images of village life during 1946-1979.