Like the rest of Britain, Kersey underwent significant change during the 20th century, reflecting the impact of two world wars and economic changes, not least the mechanisation of agriculture.  Before World War I, the village was little changed from the previous century. 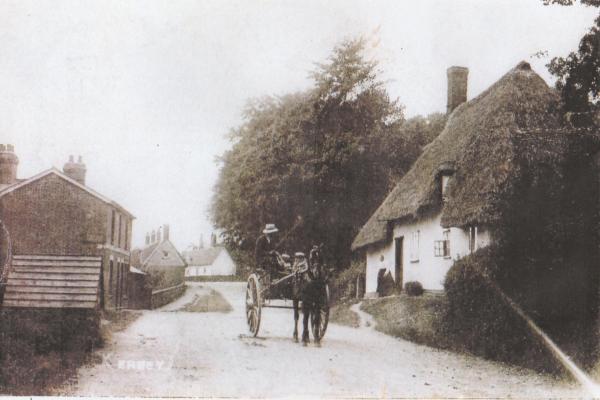 According to Kelly’s Directory the population of Kersey in 1921 was 420.  In addition to a post office, run by Freeman Walter Mann, the village had a police station, presided over by Constable Albert William Long, and a number of shops.  Of the parish’s seven farms, three (Isaac Jackson at Sampson’s Hall, Stephen Jackson at the Priory and R. Partridge and Son at Sampson’s Hall West) farmed more than 150 acres.  There was a saddler (Walter Bull), a shoe maker, (Edwin Everett), a blacksmith (James Frost Watson) and a farrier (Alfred Lemon).

For shopping, there was a shop run by Elizabeth Jarvis, as well as James King, the grocer, a pork butcher, William Arnold Goymour, and R. Stiff and Sons, grocers, drapers and warehousemen.  Two pubs served the village, The Bell, whose landlord was Arthur Farthing, and The White Horse, hosted by Frederick Orriss.  The village stores were located in what is now Market House and later moved to premises opposite The Bell Inn.

Bouttell’s Farm was a medieval farmhouse with farm buildings, including maltings, sheds and a large barn. In the 1920s, Bouttell’s was purchased by the Rt Hon Harry Balfour, then carefully dismantled and moved to Bures, where it was renamed “Dunstead House”.  Bouttell’s remaining outbuildings were remodelled in 1927 to create Ayres End.

In 1910, a Reading Room was established in a cottage, which is believed to be a former bakery, as an educational resource.  From the 1930s it was equipped with a table for billiards and snooker and was used by the Men’s Club downstairs and upstairs was used for church meetings and the Sunday School.  These activities ceased by the mid-1990s.  With the building of the Village Hall, the Reading Room had already begun to decline.

King George’s Silver Jubilee was a village highlight in May 1935, as was the opening of the Village Hall, also in 1935.  The Village Hall remains a focal point of village life.  Yet working life continued to focus on agriculture and the church retained its importance during this period.  The village pump was installed in about 1937.

Like every other village in Britain, Kersey suffered in the two world wars.  In the 1914-1918 war, it lost 17 young men and many young villagers were maimed.  Four lives were lost fighting in the Second World War.  Jimmy Squirrell was killed on a tank landing craft, the day after D-day.  During World War II, children were evacuated to Kersey from London, and prisoners of war were brought from a prisoner of war camp near Boxford to do farm work.

After World War II, the village was even sent food parcels, along with Lavenham, from South Africa.  Kersey did not enjoy the comforts of mains electricity, running water or drainage until the 1950s.

The Parish Magazine of February 1945 (see Gallery II) covering Kersey and many surrounding villages includes an advertisement for R. Stiff & Sons indicating the scope of commercial activity in the village.  Also interesting is the Vicar's call for suspension of Saturday night dances during lent and general complaints about the effect of Saturday night dances on Church attendance.

View picture gallery for impressions of village life during 1900-1945.