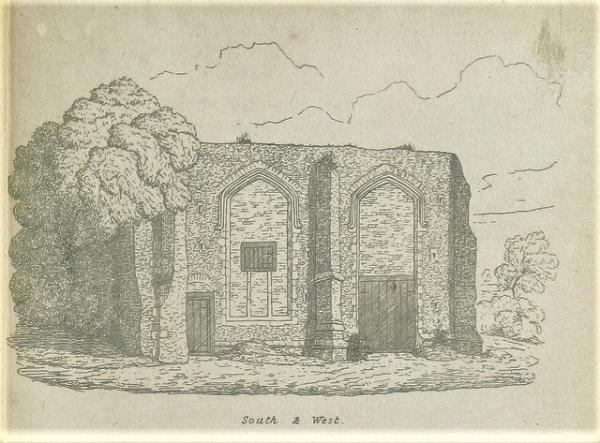 Neither the founder nor the date of the foundation of Kersey Priory are known.  It was a small priory of Austin canons, dedicated to the Blessed Virgin and St Anthony.  Its earliest record dates from 1219 when it is mentioned in connexion with lands in Semer.  According to charters held by King’s College, Cambridge, Thomas de Burgh and his wife Nesta were the main early benefactors of these canons.  After she was widowed, Nesta gave several considerable grants to the canons of Kersey.  Nesta’s second husband was John de Beauchamp and in 1240 they jointly confirmed and increased their grants to the Priory of lands and pasture in Lindsey and Kersey.

The 1291 taxation roll gives the annual value of the Priory as £33 6s 7d.  In 1338, John del Brok was obliged to give the Prior and convent property in Kersey and adjoining parishes as part of a fine, and to find a chaplain to celebrate daily for the souls of his ancestors.   By 1347, the Prior of Kersey was excused his portion of taxes (or ‘tenths’) to the King for four previous payments and for the following year.  This concession by the province of Canterbury was because the Priory had become so poor that its possessions could not support the Prior and canons.  It is probably the Black Death in the 1340s which was responsible for the decline of the Priory.

Patronage of the Priory during the reign of Edward III was incorporated into the manor of Kersey and was granted in 1331, by the trustees of Edmund, late earl of Kent, to Thomas de Weston to hold for life.  They were subsequently held by Thomas de Holand and his wife, Joan.  In the reign of Richard II, Thomas de Holand and his wife, Alice, were the patrons, followed in the time of Henry IV by Elizabeth, wife of John, late earl of Kent.  The next patron was Sir Henry de Grey, Lord Powys, who in 1444 obtained permission to grant it to the college of St Mary and St Nicholas (now King’s) Cambridge.  The Priory fell into disuse before the disolution of the monasteries in the 1530s and 1540s.

When King’s College took over the Manor property, the village church tower was completed and the building enlarged to compensate for the loss of the Priory church.  Nowadays the Priory chapel is a ruin situated on private property next to a medieval farmhouse.  The interior walls of the chapel were 49 feet long and there were two bays with arches, each 11 feet wide.  The arch from transept to choir was 10 feet wide and the transept 21 feet long.

Medieval records relating to the Manor of Kersey can be found at the King’s College Archive Centre, Cambridge, see index: